September 2003: To many runners, a marathon is the ultimate goal, the Everest of their sport. But others are somewhat more ambitious. Meet the runners of New York's Self-Transcendence 3100-mile race... 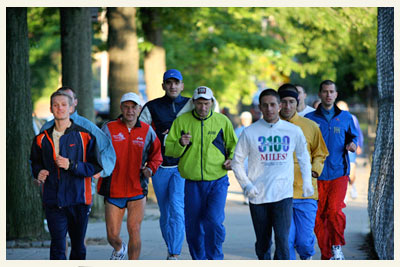 The distance: 3100 miles (or 4989 km). Longer than a drive from New York to Los Angeles, or from Paris to Moscow. It's a gruelling drive – and an even more gruelling run.

To many runners, a marathon is the ultimate goal, the Everest of their sport. Indeed, at 26.3 miles (42.2 km), running a marathon is no mean achievement. The Sri Chinmoy Marathon Team, however, sees it as a distance to be transcended. While `ultramarathons' (a broad term for any races longer than a marathon) were nothing new when the SCMT entered the scene, few have promoted these taxing events as keenly as Sri Chinmoy and his students. It follows their philosophy of surpassing their so-called physical and mental "limitations".

Even for race organizers, faced with new logistical challenges, the races have been consistently more demanding. After years of `short' ultra-distance events (such as 24-hour races and trans-America relays), the Ultra Trio began in 1987, providing runners with the three previously unheard-of races: 700, 1000 and 1300 miles. The last of those distances was not even completed until 1989, when Scottish runner Al Howie ran the distance in a rapid 17 days.

A major achievement, certainly, but not the "ultimate" event. At least, not now. In 1996, the SCMT announced a new race distance that astonished athletes ("Surely that's a misprint!"), making the Ultra Trio seem almost modest by comparison. The 2700 mile race attracted six runners from around the world. Impressively, most of them finished.

Where to go from there? The only place was up.

The next year, the race was increased to 3100 miles. It is easily the world's longest certified foot-race.

So far, the distance has remained unchanged. Seven athletes started this year's Self-Transcendence 3100-Mile Race – held on a continuous loop in Jamaica, New York – and four made the distance. However, in a race of this length,

it is not just the finishers who are heroes. A distance of 2747 miles, for example, is more than many avid runners will run in the space of a year. Abichal Watkins, a veteran of ultra-distance races, compressed those miles into 52 days.

"I've always wanted to do the 3100-mile race," says Abichal, who has run 24 ultra races in the past. "It is the unknown. You are knocking on the door, but you don't know what is going to happen."  What he discovered was, in many ways, pleasantly surprising. "It definitely wasn't as painful [as I anticipated], and

I've undergone some transformation that's beyond words," he said, a few weeks after the race. "I'm feeling pretty good at the moment." He could have continued, but had to rush to other obligations at his home town in Pontypool, Wales.

For Abichal, the 3100-mile race might have seemed a logical progression. He had run several other SCMT foot-races, including all eight 10-day events. Australian runner Rathin Boulton, however, was a relative novice. Before a sudden inspiration to attempt the 3100, Rathin had never run any further than 94 miles (152 km), in the Adelaide Self-Transcendence 24-Hour Run. An incredible distance for most of us, but not quite as arduous as running 3100 miles, over the course of two months, with only a six-hour break each night.

"It's an epic, a bit like The Odyssey or some Icelandic saga," says Rathin. "There's a lot of tough times along the  way, but at the same time, it's very satisfying. During the race, there were times when I thought `I never want to do this again.' But now it's over, I feel withdrawal symptoms. I definitely want to be there next year."

Rathin continued even after the last finisher crossed the line in 56 days, and ran alone until the official cut-off date of August 13. His time: 60 days. His distance: 2818 miles. Not the full 3100 miles, but enough to run (along the road) to Los Angeles.

However, he didn't go to LA. Instead, he continued, day after day, along the same concrete loop in New York. Not the most glamorous or luxurious track, but that was all part of the game. As the clock struck midnight (signifying the end of the race), and the cheers rang out, he remembered that he was in exactly the right place.